What Is Kali Yuga? 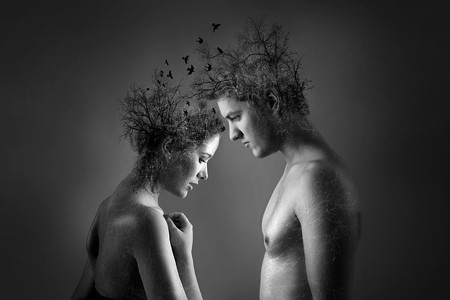 There is no doubt that the world has become increasingly darker and denser—more attached to sensory, egoic, and materialistic perception. The technological progress humanity has made is now being used in destructive ways that were unimaginable before; we’re continuously poisoning life, in obvious and hidden ways. This is because we’re reaching the end of a dark masculine cosmic cycle within a dark universal cycle as well.

Now, there’s much confusion and controversy about this universal cycle we’re undergoing, known as Kali Yuga, how it’s measured, how long it lasts, and so on, but this lack of clarity is an obvious feature of the cycle itself. When it comes to spiritual truths, I trust the enlightened masters I’ve had the privilege to meet, who say we are in Kali Yuga and still have a long ways to go, rather than self-proclaimed gurus and ‘experts’ on the web…

I’ve already explored the complex juncture of shifts I believe we’re currently experiencing and the confusion about this universal Dark Age (see Self-Ascension Into 5th Dimension and What Is the Age of Aquarius All About?), so now I’d like to share the main aspects of Kali Yuga and how you can navigate this bewildering period without getting completely lost in it and its intense egoic elements.

Kali or ‘darkness’ here refers to the age of the demon Kali and should not be confused with Goddess Kali, the slayer of ego; other meanings of kali as it relates to this demon are ‘quarrel,’ ‘discord,’ ‘strife,’ and the general sense of contention. So this is a time when war and struggle predominate, but the silver lining is that there is so much suffering during this period that just by being born you’re burning negative karma—previous actions and tendencies disconnecting you from Divine Consciousness.

Since Creation is a play of Consciousness, all the suffering your witness and experience is meant to bring you back to Consciousness. When you’re pushed to find a way out of pain, you seek and hold on to something greater than your pain, something that gives you hope and clarity for a better future. And as you do this, you gradually rediscover or reconnect to Divine Consciousness.

In time, you’re meant to realize that all suffering is a disconnection from Consciousness and that if you surrender the ego-mind that separates you from Consciousness to the spiritual forces within and around you, you’ll find true peace and happiness. But this is quite challenging in the Kali Yuga, since it’s the period furthest from Consciousness, where a lack of awareness and love predominates. In other words, the ego-mind (the demon Kali) rules and claims to be God.

The Vedic texts that give a vivid description of the Kali Yuga are the Mahabharata and the Shrimad Bhagavatam, but since the concepts used pertain to specific cultural standards and the way of life of ancient Hindus, let me summarize the overall features of this yuga in the light of our modern world.

How To Navigate Kali Yuga

A quick way to put this would be to say that during this dark cycle life is about money, power, and sensory gratification. Does this sound like the world we know? But Divine Consciousness is not linear, so this doesn’t mean that there’s darkness and ignorance and that’s it, or that we’re all doomed; there are many cosmic, planetary, and individual cycles within this universal one helping humanity discriminate between the choices leading to happiness and those creating further suffering.

Furthermore, you are an individual soul with a unique path, and as you experience things you learn, in your own time, to discern the truth from the illusions of ego. So even though we’re all really one and the same Consciousness, we each are able to follow a higher path of awareness and love at any point along our journey. Here are what I consider essential actions to counter the density and darkness of this yuga:

When you accept life as it is, you open up to something greater than the limited perception of your ego-mind. When you accept your suffering, rather than trying to avoid or suppress it (with rationalizations or addictions), you stop blocking a deeper perception of yourself. And when you accept all of you—the good, the bad, and the ugly aspects—you surrender to the Divine the false identifications and self-images of the ego-mind that keep you trapped in fear, judgment, and guilt. This requires self-awareness and self-love, so contact me today to embark on a journey of self-exploration to develop spiritual freedom and transcend the darkness within and around you!

2 comments for “What Is Kali Yuga?”