I Am Too Old For This! 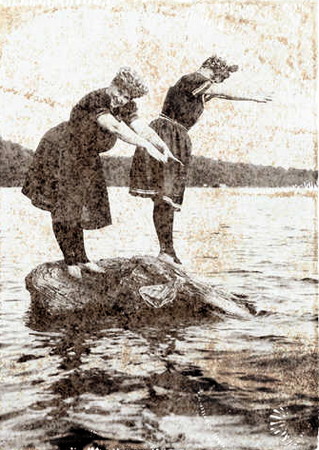 Do you ever hear yourself saying or thinking this? I know I do and have to remind myself that each life phase has its pros and cons. After all, if I had known 30 years ago what I know now, I would have saved myself so much grief!

I know, I know, life is a process… We tend to forget that there are no answers to the questions we keep asking about life, because life itself is the answer. So it is good to tell ourselves that nothing ends until it’s over, and that our soul journey is truly never-ending.

How Old or Young Are Your Dreams?

Do you remember Susan Boyle, who won second place in the “Britain’s Got Talent” contest (the British version of “American Idol”)? When that humble and homely looking 48-year old Scottish lady came to the stage, to compete with singers half her age or younger, the judges rolled their eyes, made mocking faces, and were obviously getting ready to be amused by the pitiful remarks they thought they were going to make.

But to everyone’s surprise, the minute she opened her mouth and began singing, their jaws dropped and they were speechless! The name of the song that made her an instant celebrity? I Dreamed a Dream. And you could tell that being on that stage, singing her heart out was definitely a dream she had dreamed for a long, long time. Well, soon after the contest she recorded her first album, which debuted as the number one best-selling album around the world. Now she continues doing what she dreamed of and tours all over the place.

I was able to fulfill a similar dream when I attended music school. I wanted to play an instrument as a kid, but my mom was “too busy” to take me to piano lessons. So when I started working as a free lance editor and translator, in my early 20s, I bought a piano and paid for my own lessons. It was fun at first, but my teacher was a bit too harsh for my introvert Indigo sensitivity and (like most piano teachers, I guess) was too focused on performance, so my interest eventually dwindled and I quit.

It took me some years to realize that what I was most curious about was being able to write music. I wanted to be able to put all those dots and symbols together and come up with some etheric, invisible, and delightful result. So a few years later I found a harmony teacher and then a voice teacher, and things began to come together for me to have the opportunity to attend Berklee College of Music in Boston, which I grabbed without hesitation!

The Value of Your Life Experience: Priceless!

I was in my early 30s, so most of my classmates were at least 10 years younger and had been playing music since they were kids. Some were even younger than 20 and incredibly talented! I didn’t care, however, because I was absolutely thrilled to be able to fulfill my desire and hang out with great musicians from all over the world.

Plus, since I already had the experience of college, I didn’t stress out as much as most of them when final exams came. I knew well how to play the “school game.” And it also helped me to demystify musicians—yep, they’re just like everyone else, big ego and all.

When I look back, I realize that those were probably some of the most fun years of my life, precisely because my life experience allowed me to relax and enjoy everything I was going through without all the emotional confusion of my 20s. And I can say the same when I became a mother, almost into my 40s, because I had acquired the emotional and spiritual maturity that allowed me to immerse myself in motherhood without the feelings of inadequacy I saw in younger parents.

Not that everything was easy, or that I didn’t have emotional stuff to deal with, but there were definitely some perks to being older than the average student or parent when I became one. Modern society has become so fast paced that most people feel that if they haven’t found the career of their dreams, their life purpose, their “soul mate,” or made a fortune by age 30, it’s probably too late.

Yet there are many famous late bloomers throughout history that prove that the most satisfying and meaningful things usually come later in life, because that is when we are most comfortable with ourselves, more open and—yes, I’m going to say it—more alive.

Some Examples of Late Bloomers To Get Inspired

For instance, Joseph Conrad, one of my favorite authors, published his first novel at age 37. He is now known as one of the most important writers in the English language, even though Conrad was Polish and learned English later in life! Neither age nor language could stop him from accomplishing his dream and purpose.

Claude Monet Painted his best work in his 40s. Julia Child published her famous cookbook, Mastering the Art of French Cooking, at age 49 and then became a household name with her TV show “The French Chef.”

Maya Angelou’s poetry became popular when she was in her 60s, and Peter Roget published his famous book, the Roget’s Thesaurus of English Words and Phrases that we writers know and love, at age 73.

Grandma Moses began painting at 76, after arthritis forced her to give up embroidery, and continued until 101. And when it comes to passion and dreams fulfilled later in life, I think that Devon St. Claire takes the gold, since she started her career as a fiction writer when she was 80!

So whether you are going through a mid-life crisis, or unsure about what you are supposed to do with your life, or when, remember that it’s never too late (or too early, for that matter) to start voicing the dreams, aspirations, ambitions, words, creativity, and music you carry within. I know from experience that each life crisis can be a wonderful rebirth!


Without stretching our comfort zone, which I call our “comfort box,” there is no room for growth, no matter how old or young we feel, and certainly no room to manifest our dreams and aspirations. So here’s a simple way to get yourself out of that box and into a more lively realm of possibility:

It may not seem like much at first, but slow change is permanent change and every little step you take toward your goal gets you closer to it, while waiting for the right time or opportunity to take a big step doesn’t. Knowing the resistance you’ve created (point number 2 above) will help you recognize it when it tries to deter you from your commitment. So give it a try and never give up!

I am passionate about helping life purpose seekers find their soul connection and inner voice, and turn their crises into rebirths. So contact me if you are ready to turn your dreams into an empowering business or if you need motivation, guidance, and support to create a new phase in your life, one where you can thrive and LOVE who YOU are and what YOU do.

← Are You Poisoning Your Life With Emotional Resistance?
Change Is Good… →