How Homeopathy Can Support Your Self-Growth 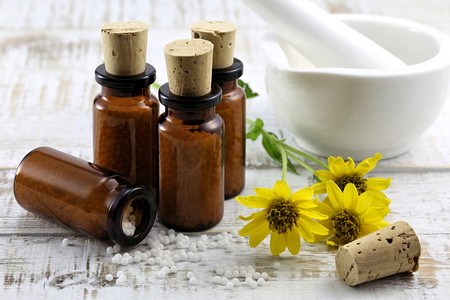 I’ve been integrating homeopathic treatment into my counseling and coaching work, to address physical or emotional issues that may get in the way of my clients’ self-exploration and goals, so I thought it would be a good idea to share how homeopathy can support a process aimed at greater physical, emotional, and spiritual freedom.

The word homeopathy is derived from the Greek words homoeos (similar) and pathos (suffering). It is a holistic system of energy medicine that uses infinitesimal doses of any substance that, when properly ‘potentized’ to turn it into a homeopathic remedy, can stimulate your body’s inherent healing power. In other words, it triggers your divine cellular intelligence.

Homeopathic principles date back to Hippocrates and have remained unchanged since German physician Samuel Hahnemann formulated them in the early 1800s. He was so dissatisfied with the methods of the medical profession (bloodletting, hunger treatments, purgatives, leeches, mercury, emetics) that he gave up his practice and chose to make a living writing and translating medical literature. This is how he came across a book by a Scottish physician describing a poisoning of Peruvian bark (or cinchona, the substance from which quinine is derived). The symptoms produced by Peruvian bark poisoning were similar to those of malaria, which in those days was cured by Peruvian bark; it was believed the cure was due to the bark’s bitterness.

He decided to perform an experiment on himself by taking four drams of cinchona twice a day to observe the results, which were spasms of chill and fever, the same symptoms of malaria. He concluded that Peruvian bark cured spasms of chill and fever because Peruvian bark produced spasms of chill and fever. As he continued his exploration with other substances, diluting them for a gentler effect, the science of homeopathy was born. In time, he produced a variety of remedies and cured cases; one in particular—an Austrian prince with a severe mental illness—resulted in the financial support (and connections to other royalty members) that allowed him to continue developing his new system.

The Law of Similars

The fundamental curing principle here is Similia Similibus Curentur or the Law of Similars. To put it simply, “like cures like.” So a substance that produces certain symptoms in a healthy person can cure similar symptoms in a sick person, but only when properly ‘potentized’ into homeopathic form, following a process of dilution and succussion that extracts the substance energetic blueprint. This makes it far more healing, safer, and gentler than material doses of the same substance.

In spite of the opposition he first encountered, Hahnemann cured so many people that physicians from around the world came to study with him and gradually spread the knowledge and practice of homeopathy throughout the world; clinical trials of homeopathic remedies (known as provings) have increasingly continued ever since.

According to homeopathic philosophy, the organism falls ill when your vital force—the life principle animating your body/mind complex—becomes imbalanced and manifests symptoms in an attempt to restore harmony; an example of this is how your body fights an infection by fueling a fever to burn and sweat pathogens, or your digestive system seeks to expel toxins through the skin or bowels. But oftentimes your vital force is not strong enough to resolve things on its own, so your symptoms get stuck, if you will, like an instrument that remains out of tune because you can’t tighten its string to reach the right pitch.

This invisible, dynamic vital force keeps all aspects of the organism in harmony and may also express symptoms when trying to resolve imbalance. For this reason, homeopathy is only concerned with stimulating the vital force, in resonance with the particular symptoms it expresses in the body/mind complex, which are the clues to finding the right remedy to strengthen it; when the equilibrium is restored, symptoms disappear on their own.

Treatment is safe, because there are no side effects, but also highly individualized. The role of the homeopath is to find the remedy that best matches the totality of symptoms of a person while also taking into account any causative factors, such as susceptibility or weaknesses, as well as other aspects of perception—physical, mental, emotional, spiritual, and social, including the family medical history. To put it simply, homeopathic treatment must follow this equation:

Now, the challenge here is that there are thousands of remedies that are very similar and cover a variety of disturbances; since a remedy can be made from any plant, animal, or mineral (or from diseases and even allopathic drugs), the trick is to find the energetic signature of a remedy matching the imbalances in an individual, which requires knowledge of the remedies and the key differences among them. To make things harder, nowadays people rush to the doctor seeking quick relief or self-prescribe with over-the-counter medications or herbal supplements that distort or suppress symptoms the vital force is trying to push to the surface, which are the clues leading to the most similar remedy—that little push needed to tune up your instrument strings, if you will.

For a homeopath, it’s the release of all the symptoms—not the suppression of separate ones, as in allopathic medicine—that shows a cure has been achieved inside and out. But there’s more to this system than healing apparent physical or mental symptoms; since it addresses imbalance on a deeper level, it can support the alignment of the various layers of the soul and prevent future imbalance. Because it’s a truly holistic yet individualized approach abiding by the same principle of vibrational resonance that designs and permeates the Universe, removing obvious complaints allows deeper aspects—the real causes hidden in the causal body of the soul—to be revealed and addressed through your process of self-exploration, self-knowledge, and energy management.

Like the vital force, healing is highly dynamic, because you are a multilayered being; so dosage and repetition of a remedy depends on many individualized factors. However, in tune with your journey of soul integration, which often resembles the peeling of an onion, it gets easier as you increasingly catch glimpses into your true nature—which is love. That is, once the most disruptive symptoms are removed, real spiritual progress can be made, to allow love to continue healing what you came to work through and resolve in this incarnation.

Many people think that homeopathy works like vaccination, or that making a homeopathic remedy out of a disease can prevent that disease, but this is not necessarily true (although this ‘isopathy’ may have its place). Only actual, individualized symptoms lead to the right remedy, because not everyone expresses symptoms in the same manner, even when affected by the same virus or pathogens. For instance, the flu may be centered around nose or throat or digestive symptoms, or a fever, and so on, depending on your susceptibility and vitality. Even a bee sting can either be a painful nuisance, a source of infectious disease or panic attacks, or become a fatal event.

Western allopathic medicine is keen on clumping and labeling these expressions of imbalance as particular ‘diseases’ or ‘syndromes’; it’s clearly more profitable for the medical industry to attack symptoms (thus creating other symptoms referred to as ‘side effects’) than actually curing people. But this is the result of an extremely materialistic approach: there’s no perception of the subtle forces animating life (your conscious energy or prana, vital force, or divine intelligence), only the physiological, chemically-based interactions in the organism this model tries to manipulate or control. It fails to understand that your physical body is the vehicle of expression of the other, subtler layers of your soul, and you are not just a bunch of chemical interactions!

Vaccination can be seen as a crude form of homeopathy, since the theory behind it is based on the principle of similars, but vaccination is not homeopathic because it’s not holistic (it focuses on the immune system alone); it’s not individualized (the same vaccine is given to everyone); and more importantly, it uses crude and toxic substances that shock the system and become a ‘frozen disease’ your body continually tries to get rid of, thus producing apparently unrelated symptoms. Like most drugs, vaccines also prevent the immune system from learning to resolve symptoms on its own, while polluting it in the process.

Only Love Heals and Your Vital Force Is Love

Homeopathy aims to stimulate the vital force, because only this divine energy can restore balance in the organism as a whole. Ayurveda, Chinese Medicine, holistic herbalism, and many energy healing methods aim at strengthening your own healing capacity as well, but the reason why this is my favorite one is because I perceive life as energy and have seen miraculous results with it. Also, it doesn’t require you to invest so much attention on healing, which can be a hindrance to your spiritual growth, since the ego-mind will fixate on anything and everything to keep you emotionally stuck.

Now, you are a multilayered soul, and life may present challenges from different angles, so you may need a multifaceted approach to resolve your ailments, including allopathic medicine for emergencies and (only absolutely unavoidable) surgeries. But you’ll empower yourself when you stop relying on the logical, materialistic, and overly masculine perception of health and disease that plagues the world, which has turned people into lab rats for the chemical and pharmaceutical conglomerates, and begin treating your body with love and respect, developing spiritual responsibility for yourself and your life, to experience greater physical, emotional, and spiritual freedom.

This requires embracing all of who you are, loving yourself no matter what, listening to your body and trusting its divine intelligence, as well as re-aligning with subtler aspects of your soul, for this is where your creative and healing power lies. It’s at this higher level of perception, through self-awareness and self-love, that you can truly transform yourself and the world. So contact me today to start or continue your healing journey guided from within!