Are You a Giver Or a Taker? 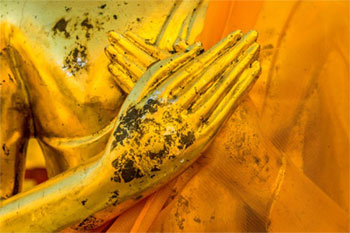 Most of us like to think of ourselves as nice, generous people. And most of us probably are, but the thing I’ve learned about truly being generous is that it’s not about how much you give but about where you place yourself when you give.

Let me tell you a little story. After I was initiated into the lineage of my guru, I attended many spiritual retreats with her. These were intense gatherings where I learned powerful mantras and ancient practices, and was able to attain deep meditative states during the group meditations she led. Just being in the presence of an enlightened saint was quite a gift!

On one such occasion, after evening meditation we all lined up to bow down and receive her blessing, as is customary in India. This was an opportunity to offer something to the guru as well, so I brought a nice bunch of bananas with me. I had observed that whenever a disciple offered a piece of fruit, she would hold it for a few seconds and then return it with her blessing.

As I was standing in line, my mind started racing. Were bananas ok? I should have brought something else instead. Did I bring too many bananas and she’d think I was greedy? Was it selfish to give her something I’d get to enjoy instead of bringing something just for her? And on and on. When I finally got in front of the guru, I handed my banana bunch. She look me in the eye and smiled while she grabbed it, split in half, put one half by her side and gave me back the rest.

My mind, of course, was very confused. Within a split second it began thinking, “Hold on, this is not the way she usually does this… Why is she taking half of the bananas?” I even witnessed myself hesitating for a couple seconds before bowing down and letting the person behind me move forward, because I was expecting the rest of my bananas.

It all happened very quickly, but when I finally got up and went outside, my heart suddenly open wide. The air was soft and refreshing; the trees looked more vivid and alive; the stars above were brighter and felt closer to the earth. I was in a blissful state I had never experienced before! I couldn’t stop smiling and giggling like a little girl, filled with love and joy, and swirling with open arms while staring at the night sky.

Then I realized that Anandi Ma had not taken half of my bananas; she had given me a blissful experience in exchange for them. She took away the energy of my resistance—which I had clearly expressed as fears and doubts while waiting in line—through the fruit I offered her. Because being as self-conscious as I was back then, bringing and giving those bananas had required an emotional effort.

The Ego Wants To Take While The Self Always Gives

I had to put my barriers aside for a moment to give, even as my ego was trying to sneak back in. She gifted me a much greater experience and insight than I could have ever expected. She was also teaching me that there is no difference between giving and receiving but in the perception of the ego-mind. This, of course, made quite an impression on me, and I began observing how and why we give or take.

The ego has a self-image to protect, so it’s easier to project our lack of generosity onto others or to disguise the hidden sense of “what’s in it for me?” when we give. Is it to make us look better in the eyes of those we care about? Is it to reinforce the belief that we’re good and spiritual even if we’re secretly expecting something in return? Is it to gain some type of validation or recognition? In other words, is your giving motivated by a spiritualized ego and your receiving by a selfish mind, or do they arise from deeper within?

Many spiritual entrepreneurs often have to get over the belief that asking for money makes them less spiritual; otherwise they’d remain unsuccessful and risk losing their business. I’ve had to wonder, is it really about the fear that money can make you greedy or the belief that you’re taking something away from someone when you ask for money or anything else? Or is it just an excuse to feed the idea that giving is better than receiving even when you give with the secret motivation of, “what’s in it for me?”?

Creation is a continuous flow of giving and receiving, in and out, up and down, feminine and masculine, dancing an eternal exchange of energy. To connect to the flow of life, you must learn to dance this dance with everyone and everything around you. Giving to others while excluding yourself is a trick of the ego-mind to keep you disconnected. Believing that you should receive without giving anything in return is another trick of the ego with the same purpose.

If you feel that asking for what you want means taking something away from someone else—be it money, love, appreciation, or any particular thing—then you’re probably projecting your own unwillingness to give. You may be able to observe this more clearly when it pops up in stressful situations, because that’s when you can’t prevent your unconscious tendencies from coming up to the surface.

Likewise, if you’re not all that willing to share who you are or what you have, then you’re projecting the lack of love you’ve suffered in the past and unconsciously perpetuating it. There is much joy in both giving and receiving because it is an exchange of energy that reflects the expansion of Infinite Consciousness through you—through your contributions and your gratitude.

Whenever this exchange becomes one-sided in the mind, it distorts its own purpose and disconnects you from the flow of abundance and creative potential of the Divine Feminine within and around you. Are you ready to break free from the ego-based distortions that keep you disconnected from the flow of life and abundance? Then contact me today and get started on a journey of self-discovery an emotional freedom to restore the Divine Feminine on the planet, from within you!

← Wow! I Could Never Do That!
Awaken The Creative Visionary Within →